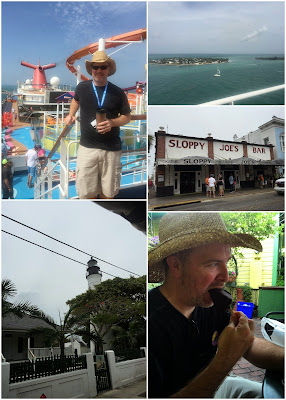 Our first destination was Key West, Florida.  Several people recommended doing the hop on/off trolley around the island so we booked that excursion through Carnival.  We were able to see Hemmingway's house, the ocean, lots of bars and shops, the butterfly house and lots of cute houses.
It wasn't what we expected.  We stopped in some tourist shops, but didn't buy anything b/c I waned to get souvenirs in the Bahamas.  A decision I now regret.
We had a chocolate-dipped frozen Key-Lime pie, had Mahi Mahi tacos from the highest ranked Yelp food trailer.  We had a great margarita and daiquiri from Sloppy Joe's Bar, where Hemingway hung out.
We went to the beach, but it was very crowded and very tiny.  It was a man-made beach so it wasn't very exciting, but beautiful water.
As we rode the trolley for the 2nd time, we could see rain coming in the distance. At stop six, it began to down pour, the ship was stop #8.  The driver got us as close to the ship as he could, but it was raining really hard.  We ran to the ship and as we rounded the corner we saw 4,000 other people waiting to board the ship in the rain.  It was raining sideways, we got soaked.  It was fine b/c we had already seen the city.
Posted by ~kristi at 7:00 AM