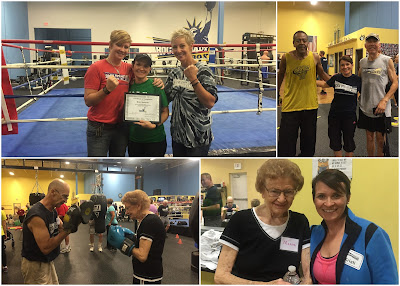 Last summer, I was approached about teaching a class for Parkinson's.  Earlier this summer, I was approached about attending a training for therapy boxing specifically formatted for Parkie's.  The only hang up was the training was in Indianapolis.  A Parkie friend's wife wanted her husband to be able to attend classes and at the time there wasn't a Rock Steady Boxing gym in Texas.  After watching a clip on facebook from RSB I knew this was for me and Ben agreed to take all four kids across the Midwest so I could attend the three day training.
I met the most amazing people; trainers, Parkies and their cornermen (care partners).  I was hooked.  Over the weekend I am sure I slept no more than three hours each night wondering how I was supposed to bring this back to Austin.  On our drive home we were outside Waco, I was driving and Ben told me he believed I was supposed to bring this back to Austin also and would pay the affiliate fee to make it happen.  I don't recommend driving I-35 with tears in your eyes, but I was overjoyed.
And God continues to direct our steps toward making RSB Austin a reality.
During the training, I felt God tell me Wells Branch is where I was supposed to be looking and I even had a shopping center pictured in mind.  After several phone calls and closed doors mainly b/c of the lack of ac/heat in traditional boxing gyms, yesterday, we met with the owner of a local kickboxing/martial arts facility that agreed to lease a space to us.  And you guessed it, the gym is on Wells Branch Pkwy in the shopping center I was originally imagining.
I have had countless friends offer to help in any way they could to make this happen, including one friend purchasing me a second heavy punching bag.  So, I am hanging on for dear life on this white knuckle ride that God has us on, I sit in amazement how God's plans are indeed bigger than mine.
#fightback
Posted by ~kristi at 3:29 PM

So excited for you and so proud of your faithfulness. God's got great plans for you and your family!!