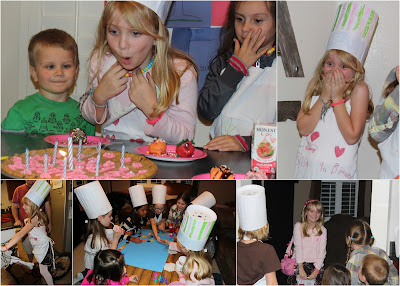 I think we pulled off a surprise party for Boo.  It was quite difficult to convince her to have her birthday party a week later, but when Ben got called out of town for the week she agreed.  Instead, I was able to pull off a party on her actual birthday.  She designed a board game and had been wanting to have friends over to test her game out.  So, I came up with a night of games and pizza. When she made her own list of ideas of what her ideal party was, at the very last minute I was able to pull it off.
Her theme idea, yummy to my tummy which included taste testing and Chopped.  I opted for Chopped.  We still got to play her game and incorporate some of her ideas.  She seemed pleased.  We along with help from Mimi and PawPaw were able to get her a new bike too.
We collected board games and have plans to take them to the local children's home before Christmas.
Posted by ~kristi at 4:13 PM